I think there might be some interesting math in use over at ZDNet. In an article posted today, James Kendrick pronounced that based on his read of the comScore's rating on smartphone market share that Android remains at the top, but somehow, Microsoft's Windows Phone 7 is already in decline in its first quarter of availability. That sounds like "fuzzy math" to me. 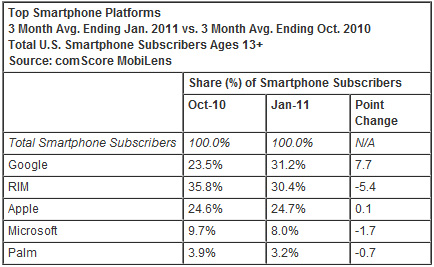 A deeper look into the numbers reveals that Comscore is tracking a 1.7% share decline for Microsoft in the last quarter, however, this share loss is across the entire Microsoft mobile platform, including Windows Mobile.

My guess is that over the next few quarters as the Windows Mobile product "gets out of the system" that Microsoft's numbers will increase. It would be great to see if Microsoft and its carrier partners could come up with a method of converting those Windows Mobile users to Windows Phone 7, but until there is feature parity (copy/paste, multi-tasking, etc) I'm guessing that this number will continue to decline until the WinMo attrition number is usurped by the Windows Phone 7 net-new quarterly purchases.